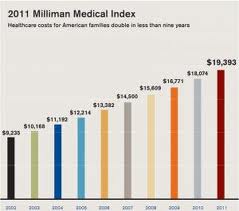 The Milliman Medical Index publication released in May, 2011  indicated that annual health care costs has increased by more than 50 percent since 2002. The publication further indicated that  financing health care is nearly 8% percent more expensive today than it was last year. Of greater concern is the fact that in just under a decade, the health care cost is 50 percent more expensive than what it used to be nine years ago. However, this rate appears to have declined in the recent years with the annual MMI increase rate declining from last year.

Contributions from both employers and their employees were included in this report. Employees have been worst affected as they now pay more than double what they used to pay in 2002. Compared to last year, the MMI has this year increased by nearly $1400.00.  Employee overall contribution to the total cost has also increased over a six-year period to nearly 40% percent up from 37 percent in 2005. In this year’s MMI, outpatient and impatient spending accounted for over 60 percent of the total healthcare costs.

This trend shows an increasing expenditure on health care costs for both the employers and employees although it is the employees who are getting beat up the most.  This year alone, there has been a nearly 10% increase in payroll cuts for settling insurance costs. The employer contribution has, however, dipped in the last two years by an average of 7% percent in 2010. MMI also points out that family healthcare costs differ significantly across the different states. Some areas are above the national average, while others fall below the national average. MMI says an average family of four spends about 15 percent of their total health costs on pharmacy, over 30% as medical fees to physicians, 31 percent on inpatient expenses and  over 15 percent on outpatient bills.

On a personal note; although the MMI indicates a 50  increase healthcare costs and a rise in employee contributions – the cost of Health Insurance Premiums have sky-rocketed.  InsureDirect.com now spends 4 times more on HealthCare Insurance than it did just 4 years ago.  We have seen a consistent increase of about 25% until last year.  At out most recent renewal our premium nearly doubled.  Quite frankly; I hate to see what’s in store for 2012.  Only time will tell…..