Post Date August 19, 2012 –  Ohio State Insurance Industry analysts say more than $400,000.00 in claims have been paid as a result serious storms activity.  A recent claims study conducted by the Ohio Insurance  Institute (OII) shows there has been an increase in Ohio auto insurance rates and Ohio homeowners insurance rates due to insured losses incurred due to the latest summer which has hit Ohio from June 28 through July 4, 2012. 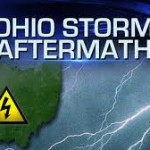 OII estimated the amount of claims filed are as follows:

These Ohio summer storms brought hail, tornadoes, high winds, and floods both in Ohio and other Eastern and Midwestern states totaling millions of dollars of damages to cars, homes and businesses.  The storm events from June 28 to July 2 have recorded an overall claims damages of $1.125 billion in all states. The storm events and Property Claim Services ranks the state of Ohio to have the highest losses. Along with those losses comes rate increases. Ohio Auto Insurance Rates have been affected. The OII made it clear in their study the data only represented estimates and does not encompass all  Ohio insurance companies in the state.