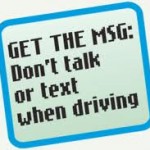 Post Date January 6, 2013 – If you have been following our InsureDirect Insurance Blog, we have been spending a good amount of time on texting and distracted drivring.  Recently an Ohio Car Accident was caused by a young man texting on is cell phone while behind the wheel.  Sadly, a mother and her 10 year daughter were involved in a Ohio Car Accident when their car was hit in the rear by a youthful operator.  When their car was hit, it was pushed into the path of an oncoming car and rammed head-on with another car. The little girl died while being operating at a local hospital for the injuries that resulted from the car crash.

Ohio Car Accident and texting must be stopped

After the incident, the youthful operator pleaded guilty to his role in the Ohio car accident pleading guilty to both vehicular homicide for the death of the little girl, and to aggravated vehicular assault for injuries endured by the mother and her younger brother in the Ohio car accident. The youthful operator whom caused the Ohio Car Accident admitted he was responding to a text he received and that he was distracted.

In November, he was sentenced to fives years in jail. During the sentencing, phase of the trial, the operator whom cause the Ohio Car Accident stated “There’s not a day or an hour that goes by that I don’t think about all the people affected on every side of this. If somehow I could change places I would, I’m just sorry.”

The Prosecutor in the case said it was necessary to aggressively prosecute this case due to its nature. Texting while operating a motor vehicle is become a big problem. All drivers, specifically youthful operators need to understand the dangers. This specific ohio car accident would not have happened if the young man was not texting,