Due to that fact, we urge you to check out getting more coverage than the bare minimum when buying Oklahoma auto insurance. 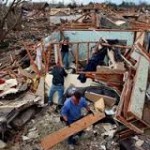 Post Date May 25, 2013 –  Oklahoma Homeowners Insurance will pay more than two billion dollars in damages after a  tornado batters an Oklahoma suburb, killing more than 20 people.  The Oklahoma Department of Insurance stated the official preliminary estimated claims were based on assessments in the areas damaged by the tornado which touched down in Moore, OK  on Monday, May 20.  The disaster zone cut out a strip of land about a mile wide and more than 17 miles long.  The Tornado leveled a thousand homes, many of which were destroyed completely.  According to official estimates, around 13,000 homes have been affected resulting in Oklahoma Homeowners Insurance Claims.

The two billion dollars in Oklahoma Homeowners Insurance Claims has been limited to homes and other infrastructures. These figures do not include other insurance related damage to other property such as cars, trucks and other types of vehicles. The National Weather Service  classified  the tornado as an EF5 with wind speeds of more than 200 mph.  News footage from the disaster show debris from structures and cars that were pulverized.  This is not the first time residents in OK were forced to use their Oklahoma Homeowners Insurance.  In 1999, Moore residents had experienced same fate when a tornado also battered their community that brought about $1.4 billion in insured losses. But insured losses on the recent tornado incident in Moore might exceed that of the damages sustained by Joplin in 2011. Homeowners Insurance  losses from tornado incidents in the United States last year registered a $14.9 billion in insured losses. With the amount of damage incurred in Oklahoma recently, residents may experience a spike on their Oklahoma Homeowners Insurance payments this next few years.

Post Date November 20, 2012 – Looking for a new state to move too? Wondering where in the U.S. you could potentially save the most money on your auto insurance? The best rates on car insurance can be found in the State of Ohio.  A recent study indicated among all the U.S  states studied, the… END_OF_DOCUMENT_TOKEN_TO_BE_REPLACED

Friday’s Post 11/18/11 –  A new car insurance law  started on November 1,  2011 will make life a lot more uncomfortable for those motorists without auto insurance in the state of Oklahoma . Oklahoma has one of the highest rates of drivers without insurance, which now stands at 25 percent of the driving population, almost twice the national average of 14… END_OF_DOCUMENT_TOKEN_TO_BE_REPLACED

The Oklahoma governor, Mary Fallin announced a program that will see homeowners get a cash rebate amounting to $2,000 for the installation of the right tornado shelter. The program will cost up to $1 million in federal money and is expected to cover approximately 75 percent of the installations for below or above ground shelters. According… END_OF_DOCUMENT_TOKEN_TO_BE_REPLACED

Visit www.insuredirect.com or call Toll-Free (800) 807-0762 to receive an Auto Insurance Quote for you and your family. END_OF_DOCUMENT_TOKEN_TO_BE_REPLACED