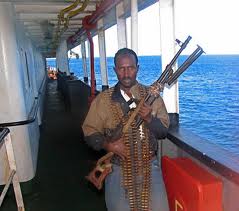 A host of marine insurers have come to the support of private armed guards manning merchant vessels in a bid to fight piracy. This is in the wake of increasing attacks, massive losses and the revelation that the trend is likely to escalate in the next few weeks. This was reported on Tuesday by industry officials. Pirate attacks on oil tankers have affected the world economy on a considerable scale. Billions of dollars are been lost annually. Navy’s have been trying to thwart the peril, particularly in the enormous Indian Ocean where attacks are most previlant. There have been reports that seaborne gangs are on the loose and are planning attacks towards the end of the monsoon season and who are taking advantage of the famine crisis in Somalia.

“Piracy is gravely affecting globalization”, says Lloyd’s of London. There have been no reports of any vessel guarded by private armed guards being hijacked by pirates. A conference held annually by the International Union of Maritime Insurance (IUMI) revealed that both the Indian Ocean and Gulf of Eden register an excess of 20,000 transits every year. The idea of hiring private guards to convoy ships has become one of the most successful ways of combating pirate attacks around the Gulf of Eden. The majority of ship owners are shying away enlisting armed private companies in fear of legal responsibilities and weapon risks in some territories. This is why IUMI underscored the importance of complying with the flag state legislation. According to a press briefing conducted by IUMI president, Ole Wikborg, this will not entirely deal with the problem but it would help protect vessels along the Indian Ocean.

Insurance companies opposed the view that much is gained from the provision of piracy covers policy. They argue that the premiums paid are not in tandem with ransom costs. French Maritime Economics Institute (ISEMAR) reported that at least 1,000 private guards that are already employed by shipping companies to deal with the threat posed by pirates. One of the major industry players, the Security Association for the Maritime Industry (SAMI), which is a 58-member group seeks to encourage companies to finalize on the accreditation process at least by the end of the first quarter in 2012. This is according to Peter Cook; one of the group’s founders.

On the same note, shipping companies associations are calling upon the UN to provide armed military forces to accompany vessels to mitigate the spread of illegal contractors. According to analysts, Somali pirate attacks are projected to rise from 200 in previous years to 250 by 2015. Pirate profits are now in the excess of $120 million, up from$80 million in September 2010, said a French Navy Captain Xavier Mesnet in the conference. He further added that although the hiring of private security would shun the use of navies, it would moist likely prompt pirates to develop new tactics. Speaking to Reuters, the Captain said that the French Navy harbors no intentions to relent on its counter piracy endeavors.