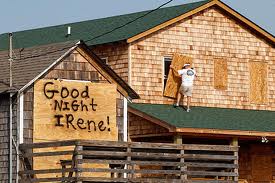 Last week was very difficult for me, my family and my auto & home insurance clients.  So why was it difficult for me and family.  Although I was fortunate to have very little storm damage, I live in Pennsylvania and was stuck without electric for nearly 4 days. The loss of electricity caused us to lose almost $1000.00 in refrigerated and frozen foods. Now where that’s a sad story; my customers in northern New Jersey and New York are the ones whom had a truly hard time. With the flood waters now just receeding,we are now just receiving calls reporting both Car Insurance and homeowners insurance claims.  Where the majority of the claims filed will be covered; sadly, many  calls were from customers whom did not purchase the proper insurance even though  rate quotes were offerred and recommedations were made by me or my agents.

In the history of United States, Hurricane Irene made  it’s own history by becoming the first hurricane to hit the east coast in three years and could be the catalyst the insurance industry has been seeking in its quest for across-the-board premium increases after years of weakness.

A weather-tracking map Monday the 29th suggested Irene could make landfall as soon as late Thursday. Though the tools are less reliable in advance of 72 hours from landfall, some models forecast that the Carolinas were vulnerable to a major storm with winds in excess of 110 miles per hour. Regardless of the idea that 2011 set a promise to be the costliest year in history for natural disasters around the globe yet no one could ever set it true.

By some estimates, insurers have lost as much as $90 billion already this year, 20% more than they lost in 2009 and 2010 combined. Insurers have not been able to raise rates for three years amid strong competition and readily available supply, but industry veterans say even a small storm now would be enough to trigger premium hikes. “It wouldn’t take much of a material event to cause significant firming,” said Gary Prestia, chief executive of the U.S. business at Global Reinsurer Flagstone Re. “It wouldn’t take the typical $40 billion Katrina to push this into a firmer market than it is currently.” As the prices become firm, then analysts say it is a fair bet that share prices will follow.

Most property and casualty insurers are now trading at historically depressed multiples of their book value. Property insurance stocks at their peak typically trade at two times book value, according to analysts at Barclays Capital. At a sector median of 0.83 times book today, according to Thomson Reuters data, that makes them cheap.

Historically, shares of reinsurance companies, which insure the insurers, loses its value during typical late summer and early fall hurricane seasons but rally sharply after major storms, according to an Aug. 22 research report from JMP Securities. Share prices across the sector rose, on average, about 32 percent in 2004 and 20 percent in 2005.

Now, the shares of many of the largest insurers and reinsurers based in Bermuda are down sharply this year despite the active hurricane season. Whether Irene reaches the $15 billion damage mark that can turn the market depends to a great degree on where it hit. A weak Category 1 hurricane in Miami would probably not have enough power to trigger rate hikes. However, any catastrophe modeling company will say that a Category 4 or greater hurricane in Miami – storms can ascend as high as Category 5 – would be devastating.

Recently, the U.S. National Hurricane Center conducted a five-day forecast that shows the  first ever hurricane of the 2011 Atlantic season swinging up Florida’s east coast on Thursday for possible landfall in South Carolina on Saturday. When all the damages are verified by the actual event, this’ll just be another multibillion-dollar event on top of an incredibly busy year already,” said Jose Miranda, a senior executive at catastrophe modeling company EQECAT.

“Hurricane season is only one-third over and we’ve already had almost a full year’s activity on average already,” said Miranda, on a follow – up statement. The Carolinas, which were ravaged in September 1989 by Hurricane Hugo, consider one of the 10 worst natural disasters in the United States, are particularly vulnerable. The coastal populations of the two states have gone far doubled between 1960 and 2008, according to U.S. census data. Yet, South Carolina has successfully wooed private insurers but its northern neighbor has been less successful, as insurance executives say.

Earlier this summer, the Insurance Information Institute has reported that the potential loss exposure of the North Carolina Insurance Underwriting Association – the state-created insurer of last resort – increased 60 percent in the last six years. The NCIUA, which says it can cover up to $4 billion in losses, is funded by insurers that operate in North Carolina and share losses equally in a disaster. Any payouts beyond that could force the group to issue bonds, it has said.

NCIUA on Monday said the approach on hurricane Irene could lead its members to stop writing new policies or even impose restrictions on existing ones in the next two days. Insurers have complained for years already that the North Carolina consortium is under funded and could be undermined by a once in 50 year’s type of windstorm. (Insurers consider a one-in-100 year storm a benchmark of serious disaster.) Some worst-case scenarios are covered by catastrophe bonds, this bonds which insurers and reinsures use to transfer risk to outside investors as well.

Percentage of the “cat bond” market with exposure to U.S. hurricane risk has grown from 38 percent in 2003 to 71 percent today, according to reinsurance broker Guy Carpenter. This depicts that certain bond – type insurance deals is ready to set when it desirable to do so.