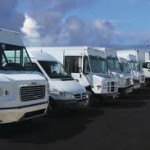 Post Date August 23, 2012 – After submitting an initial fraudulent insurance application, continuing the ruse through nearly a decade of renewals to obtain lower auto insurance rates in New Jersey , a  New York City businessman was arrested and arraigned last week. Scott Sanders, an operator of  large fleets of commercial vehicles is being accused of defrauding  New Jersey Auto Insurance companies for at least $10 million in payments since 2003.

Currently, Sanders is being charged with one count of conspiracy to commit wire and mail fraud, five counts of mail fraud, and one count of aggravated identity theft. Each count of mail fraud charge carries a maximum penalty of 20 years while the aggravated identity theft carries a mandatory minimum and consecutive sentence of two years imprisonment. The state of New York requires all commercial vehicles carry commercial auto insurance liability.  Typically,commercial auto insurance rates in New Jersey for such coverage is based on the location of the vehicles’ operation and garage. Vehicles principally operated and garaged within New York City are usually being charged with substantially higher premiums than the auto insurance rates in New Jersey.  Over the last twenty years I have been in the car insurance business, insurance fraud appears to be much higher in state border areas.     Because of the disparity of rates on either side of a state line; auto insurance fraud is a huge temptation between New Jersey and Pennsylvania;  New Jersey and New York City and Pennsylvania and Ohio.  Bottom line, both carriers and agents need to be vigilant.