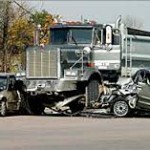 Post Date March 28, 2013 – A Federal Lawsuit was filed against a  Long Haul Truck Driver  was involved in an deadly collision in January of this year.  As a result of this incident, two women were killed as a result of the supposed negligence. The lawsuit came from the husband of one of the fatalities, Suzanne K. Stephenson, 65 years old, a resident of Monroeville, Indiana.  Mrs. Stephenson was a member of the Monroeville Town Council for  over 18 years.  The driver identified as Scott A. Saunders, is being sued for $75,000 of damages. Saunders was driving his semi-trailer rear-ended two vehicles that resulted to the death of two women, and injuries to seven other people. The said accident also caused a pile-up on the said highway. If found liable the Truckers Commercial Truck Insurance Policy will be forced to the $75,000.00.

Commercial Truck Insurance is vital to any shipping business…….

The other fatality was identified as Sandra Dealy, 43 years old, of Convoy, Ohio. Both Stephenson and Dealy were driving two seperate cars at the time of the collision.  A State Police investigations revealed that at that time the light  green and the traffic had already started moving forward when the truck driver failed to slow down.  The Semi hit the rear end of the Stephenson car resulting in her death. The semi that Saunders was driving is owned by Kutzler Express, a Wisconsin-based trucking company. Kutzler is also being named in the lawsuit file by Mr. Stephenson. Although this agent is not aware of the Commercial Truck Insurance carriers covering the drivers vehicle; any shipping enterprise which uses trucks to move freight must purchase a Commercial Truck Insurance  Policy.

The crash is now being investigated by the Allen County Prosecutor’s Office. The actual cause of this fatal accident has not yet been determined.  It’s possible this is an issue of negligence or a maintenance problem.   Regardless; the injured parties as well the families of those killed in the accident can file a lawsuit seeking compensation for their loss.  It is for these events that trucking operators, company or independent are required to Commercial Truck Insurance liability to compensate others for the injuries it has inflicted to other parties in the course of operating the vehicle. If you are in need of Truck Insurance immediately, call InsureAtruck.com.