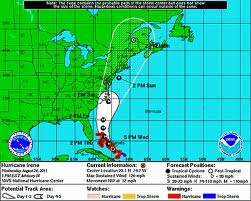 Many InsureDirect.com customers throughout Pennsylvania, New Jersey, Delaware and Maryland and parts of Ohio experienced losses from Hurricane Irene. It seems like no one was immune regardless if you lost your car, home, motorcycle or boat to wind or flooding.  My family home I lost its power for four days and many of my neighbors in the Bucks County Area of Pennsylvania experienced severe flooding and extensive property damage. I also have many  other customers in Wilkes Barre, PA  whom suffered much more since that area was evacuated as a result of the severe storms.

Connecticut Governor Daniel P. Malloy has indicated  Connecticut has entered into negotiations with some a number of Homeowners Insurance Companies in the state to ask them to waive  Homeowners Insurance,  Auto Insurance and Commercial Insurance deductibles for their hurricane policy that have come about as a result of damages to coastal properties arising from Hurricane/Tropical storm Irene.  Auto, homeowners and business owners in the area who happened to have their property destroyed or damaged are set to benefit from the waiver.

Irene’s drenching resulted in the destruction of some 244 homes according to Malloy. The total damage to public property has been pegged at some $16 million according to state officials with the figure being expected to rise as the storm subsides. By the time of filing this report, estimations of damages arising from the storm to private property had not yet been accurately calculated. This damage is however expected to be substantial.  Insurance analysts have even hinted that federal disaster aid could be required for at least seven of the eight counties in the state.

President Barrack Obama had assented to a disaster declaration for the state of Connecticut which had effectively availed disaster relief  by FEMA for five of the eight counties. However, the Federal Emergency Management Agency was quick to allay fears that other counties would be left out of the disaster relief efforts by indicating that assessments of the damage in the other counties was already underway and help would be on the way soon.

Five reputable insurance companies involved in writing insurance policies and who are major players in the industry had already agreed to have the deductibles waived according to governor Malloy. This was however specific to policies of coastal homeowners that covered hurricanes. The deductibles are usually a percentage of the total cost of the home which means that homeowners are eventually required to fork out thousands of dollar before the coverage for the hurricane can be deemed to have begun.

Without these waivers, the joint figure for all homeowners could have been as high as $ 100 million. This is according to a review carried out by the state insurance department. Irene has caused extensive damage to cars, trucks, boats,  infrastructure such as road and power lines and left two people dead in its wake. Heavy flooding has also been reported as far north as New England.