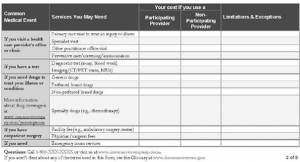 Regardless if your business is located in New Jersey, Pennsylvania, Delaware, Maryland, Ohio or anyplace in the US starting next year in 2012, Insurers and employers will have to clearly state the costs and benefits of the health and insurance plans that they are giving out. The U.S. health officials announced this rule only this Wednesday. This is made to better inform the public about the health insurance options with a qualifying standard label, as the Department of Health and Human Services compare it to the ingredients on a box of cereal.

The label should clearly lay down everything to the customers from their premium, deductible and out-of-pocket costs, and even the costs associated with medical treatments and events such as regular doctor check-ups and medical visits. This rule is part of President Barack Obama’s 2010 health care overhaul, as consumer groups complain that pages of fine print accompanying the insurance plans are often misunderstood and are totally confusing.

“As of Today, many consumers have a hard time understanding the information in plain English to enlighten them about the differences in the coverage and benefits covered by these distinct health insurance options,” exclaimed by HHS Secretary Kathleen Sebelius. Consumer Union Senior Health Policy Analyst Lynn Quincy adds that “Consumers are less likely to find themselves in health plans that don’t meet their needs by simply making the terms of health insurance plans plainly understandable.”

The executive director of state affairs at Blue Cross Blue Shield Association Kim Holland states that insurers are supporting people other than knowing what they are getting, but still echoed that concern. Insurers are highly concerned that the price of the plans will raise as the administrative costs associated with these labels will also raise. Holland also said before the rules were released that “The concern here is we already have a body of law that tells us what need to have.”

Recommendations from a group formed by the National Association of Insurance Commissioners that includes insurance companies, consumer groups and academics would be followed by the six-page labels of the newly-build rule for insurance plans.

“NAIC’s recommendations was not what everybody wanted, but still, it is comparable to having a recommendation from a consensus,” quoted by Sabrina Corlette, NAIC consumer representative and Georgetown University Research Professor. “You wouldn’t be comparing apples to oranges anymore, so it would make it much clear for families who need insurance plans to make those decisions,” she added.