New York Drivers: Visit www.insuredirect.com or call Toll-Free (800) 807-0762 to receive an Auto Insurance Quote for you and your family. We represent over 30 insurance providers across the country and offer low rates and instant coverage.

Post Date July 17, 2014 – More and more states and localities throughout the country have instituted laws prohibiting texting while driving.  These laws will make these actions a crime which come with severe penalties for these violations.

It’s important that we all keep in mind the danger we put others in while using our smart phones for texting while driving. 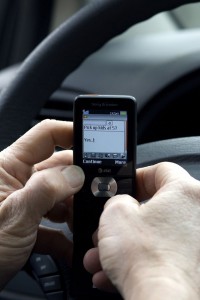 As for other traffic violations, any moving violation or infraction listed on your driving record can affect your auto insurance premium. In states where laws on distracted driving have already been passed, they already prohibited the use of handheld cell phones and other mobile communication devices. Getting caught texting while driving will surely earn you a a moving violation.  Aside from the financial penalty which comes with a citation, you can also expect increased rates on your next auto insurance renewal.

Only a handful of states having instituted laws to criminalize the use of mobile devices while your hands are at the wheels, the states of New Jersey and New York  holds the harshest point-related penalties. Texting while driving in New York can earn a driver a three-point penalty.

A new study from State Farm revealed that the number of drivers that are using their mobile gadgets not just for texting or making a call but as well as using other services like e-mailing, playing music, etc., have increased. The distracted driving report made by State Farm involved 1,000 surveyed auto insurance consumers.

The study also showed that drivers who use mobile communication devices while driving are not only confined to the younger age group. It now applies to almost all ages and that the numbers are on the rise.

Post Date  January 14, 2013 – That financial damage incurred from Superstorm Sandy will cost the state of New York about $33 Billion. With a budget of $132 billion a year, New York Insurance damage losses of 33 Billion dollars will most likely bankrupt the state if the federal government does not chip in. The… END_OF_DOCUMENT_TOKEN_TO_BE_REPLACED

Post Date November 19, 2012 – The United States Boat Owner’s Association announced last week more than 70,000 power boats, sail boats and jet ski’s were either damaged or sunk when Hurricane Sandy his the east coast two weeks ago. Hurricane Sandy and the winds it brought to New Jersey, New York and the other states… END_OF_DOCUMENT_TOKEN_TO_BE_REPLACED

Post Date November 12, 2012 –  Hurricane Sandy was the most devastating storm to hit the east coast in 60 years. Both Homeowners and Auto Insurance Carriers have been adjusting thousands of claims compensating those for Flood Damaged cars and homes.  Two states out of the 9 effected by the storm had the highest number of… END_OF_DOCUMENT_TOKEN_TO_BE_REPLACED

Post Date November 11, 2012 – Hurricane Sandy was the most destructive weather event in the northeast over the last 60 years.  The death and destruction from Sandy will be felt for decades.  Law makers in the effected eight states and the District of Columbia recently announced a temporary change in Homeowners Insurance Rules to help… END_OF_DOCUMENT_TOKEN_TO_BE_REPLACED