Post Pate August 28, 2012 –  A New Jersey teenage driver who was texting while driving his car caused two people to suffer greatly after his negligence caused a serious at fault accident. The teenage driver whom struck and injured a couple on board their motorcycle had a multi-million dollar lawsuit filed against him and his girlfriend. When an at fault driver has caused an accident where his/her car insurance company must pay an claim in excess of the states accident threshold, you must expect an increase in your NJ auto insurance rates. 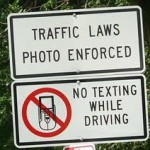 Linda and David Kubert, a couple from the state of New Jersey, each lost a leg due to the texting incident which resulted an accident.  The accident originally took place  nearly 4 years in 2009.  David lost his left leg while his wife Linda, also had her left leg amputated. According to a story in the The Parsippany’s Daily Record, the couple who are now living in Florida is experiencing severe financial difficulty.  David is no longer able to work and his wife has yet been able to secure any employment.

The youthful operator whom caused the accident had previously pleaded guilty to  a charge of distracted driving and had admitted that he was using his cellphone to send a text message while driving his car.  He also acknowledged the text messages he received and replied to were from his girlfriend. The auto insurance company which insured the teenager’s car has agreed to settle with Linda and David Kubert for $500,000. This is the maximum liability payment under the teenage drivers car insurance policy. Although the youthful operator will see an increase in his NJ auto insurance rates because of the $500,000 claim,  state law states his NJ auto insurance rates will not increase anymore than if the claim was only $1500.00. The teenager had been been ordered to pay $775 in fines and to speak to high school students about the hazards of using cellphones while driving.

On a side note;  the judge in the case stated the teenagers girl friend should not be charged with any type of crime since she was not physically present. The attorney for the   aggrieved couple is still planning to appeal a judge’s earlier ruling that the drivers girlfriend should not be held liable for the crash. The girlfriend was sending him a text message while he was driving. The crash happened while the driver was replying to that message. Although she was not physically present at the incident site, the Kubert’s attorney argued that she is “electronically present.” Thus, they are asking for her also to be liability for the crash. If the ruling is over turned on appeal, the girl friends auto insurance policy can be accessed for it’s liability limits.  If the girlfriend is found guilty her NJ auto insurance rates could increase as well.

← New Jersey Car Insurance Policy No No’s!
Buy Auto Insurance: Who Needs It And Why? →