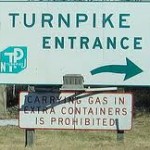 A recent fatal accident on the New Jersey Turnpike which killed a Toms River man just proves why maintaining NJ Commercial Truck Insurance is so important.

Last Tuesday on the 11th anniversary of September 11, two commercial trucks collided near New Jersey Turnpike’s Exit 8 that caused the immediate closing of  the southbound lanes to both private passenger and commercial truck traffic. Firefighters from Hightstown, East Windsor, and Cranbury rushed to the scene of the incident.  All the NJ Turnpike’s southbound lanes were closed for hours while authorities investigated the collision and removed of the damaged vehicles. According to reports, at around 12:26 a.m., Phillip Frey, 33, of Toms River, N.J., was driving his box truck  when he rear-ended a United Parcel Service tractor trailer. It was immediately obvious Phillip Frey was not paying attention and cause the accident.  Both the box truck and the tractor trailer exploding in flames according to the New Jersey State Police. Frey reportedly died at the accident scene while the driver of the other drivers name has not yet been released is not yet available. The UPS Driver survived the incident without any injuries. The victims family will be paid by the NJ Commercial Truck Insurance if the policy carried an accidental death endorsement.

Accident information from the New Jersey Turnpike Authority shows in the last decade accidents on the NJ Turnpike reached 80,000.  7000 of those accidents were considered to be fatal.