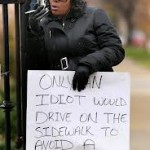 Post Date January 28, 2013 – A driver from Ohio who was recently caught on camera driving her car on the sidewalk.  Although under normal circumstances driving on the side would be considered foolish; in this situation the driver was an idiot.  In fact, the Ohio Drivers license was suspended for a particular stupid driving infraction.  In fact, stupid in an understatement. Shena Hardin a 34 years old driver from the State of Ohio was sentenced by a Cleveland Municipal Court Judge for the stupid driving move she perpetrated. On September 11 2012 ,  Hardin was caught on camera using the sidewalk to pass a school bus which was stopped and dropping off  children at their bus stop. On the day in question Hardin was driving her car in Cleveland, Ohio.  As she arrived at the downtown Cleveland intersection, She proceeded to drive her car up onto the sidewalk and passed the school bus. She  was sentenced to one hour of wearing a sign “You must be an idiot to pass a School Bus on the sidewalk. Aside from embarrassing public sentence, Hardin was also penalized to pay $250 for court costs and had her Ohio drivers license suspended for 30 days. Personally, having your Ohio Drivers license suspended for thirty days for such a uncaring act should have their Ohio Drivers License suspended for 5 years.

Much to her surprise, satellite TV trucks were present nearby to publicize her sentence, streaming a video with Hardin holding the idiot sign. The said sign states “Only an idiot would drive on the sidewalk to avoid a school bus.” A mother of a 9-year old girl who was onboard the bus which Hardin passed on the sidewalk, Lisa Kelly, commented that Hardin sentence does fit for the act she committed. Kelly said that just what the sign says, “She’s (Hardin) an idiot.” Kelly watched as Hardin served her sentence with her eyes covered by dark glasses.  Though the sentence seems to be humiliating to a person, the parent said that the driver needs it. Kelly described Hardin at every court appearance to be unremorseful and laughed during the proceedings. However, the parent felt sorry for Hardin as she was standing in cold serving her sentence.