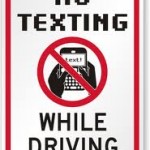 Sending A Text To A PA Driver Needs To Stop

A recent decision court decision regarding a couple who were both severely injured after being hit by a teenage driver who was sending a text to a PA Driver.  The PA Auto Accident occurred a few years ago when a couple who were riding on a motorcycle. The couple filed a lawsuit against  driver but eventually settled for $500,000. However, they also sued the driver’s girlfriend who was sending a text message to a PA Driver prior to the incident.

But this lawsuit did not prosper and was later dismissed as there was no evidence that will show that the girlfriend did have the knowledge that her boyfriend was driving at the time of exchange of messages, or that he was texting while driving.

The appeals court in Pennsylvania explained that a person who sent a text message to a driver who would then cause an accident can also be held responsible if the sender was aware the other person receiving the text was driving.

Texting while driving had been a hot issue among motorists in the United States as this had become one of the top reasons why car crashes occur. With the alarming rate, a number of states are institutionalizing laws penalizes texting while driving. However, authorities have been having a hard time implementing the said laws as traffic enforcers are having difficulty knowing that drivers are using their mobile devices while having theirs hands busy with the wheels.

As to promote safety, InsureDirect.com encourages that drivers must refrain from using their mobile phones while driving their car, trucks and motorcycles. If you know someone is driving,  you must refrain from engaging them in text messaging conversation.