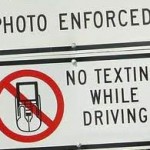 Post Date March 25, 2013 – Not only are drivers banned from texting while driving  in most states in the U.S., you can expect a suspended drivers license in PA for that offense. In addition to the ban from texting while driving, many states have barred drivers from using mobile communication devices. Even with the punishment of a Suspended Drivers License;  a question still exists among most states law enforcement authorities.   Does the cell phone usage ban make the roads any safer in Pennsylvania?

Texting while driving a car, truck or motorcycle will result in a suspended drivers license

Although cell phone use in cars is at least 30 years old, the use of hand held cell phones are now being examined.  It’s more vital than ever to see the long-term trends of accident rates and their relation to cellphone bans.  Many states have compared and analyzed years of driver data.  These studies where first pioneered in the State of New York before imposing the first statewide texting while driving ban. The State of Pennsylvania followed there after with punishments as severe as  multi-year suspended drivers license for with more than one offense.  Both New York and Pennsylvania have the same weather patterns and a wide diversity in size and population density of counties.

The researchers in both NY and PA classified counties into three classes – rural, very rural, and urban.  Among the three county classes, the cellphone-use ban was associated with a raising accident rate among those drivers using cell phones for texting. Both the NY and PA studies suggest that in higher driver density areas with such ban, there is a significant reduction of traffic accidents. However, in very rural areas, the cellphone ban was associated with a relative increase on accident rates. Though the study had a surprising result on very rural areas, what is clear is that, statistically speaking cellphone ban have decreased accident rates among areas which can support the idea that such shall be effective if imposed on densely populated areas.