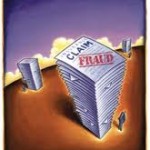 Post Date May 6, 2013 – A Chiropractor and an owner of  a  chiropractic clinic in Bryan, Texas admitted to conspiracy after defrauding several Texas Auto Insurance Companies for  nearly 4 million dollars.  The owner, Marion Young, 42 years old, of the now out of business “Private Chiropractic Care”. Young admitted that for two years, he conspired in defrauding Texas auto insurance companies through recruitment of people who claimed to be victims of car accidents.  Young allowed his clinic to be a front for fraudulent chiropractic therapy bills for treatments that were not actually performed.   The bills were used then as supporting documents for demand letters sent to Texas auto insurance companies soliciting legal settlements.

Court documents show the fraudulent activity had cost Texas auto insurance companies between $3 million and 4 million dollars.  Out of this multi-million fraud,  the chiropractor’s share was only around $112,000.  Another person identified as Chase Lindsey has been accused along with the doctor. Lindsey and Young evaluate the people who have been recruited to participate in the fraud. Lindsey provides fake medical evaluations to the patients and recommend treatments. In exchange for his participation, Lindsey was receiving $2,000 in cash every month.  He allegedly earned around $58,000. Lindsey’s usually prescribed six treatments to be preformed  four times a week for a month sometimes a month and a half.   The patients would only receive two heat/ice packs, and electric stimulation and would only go to the clinic once a week for a 4-week period maximum.  Young admitted that he has knowledge most of the reported treatments were untrue and that the bills are being prepared from the conspiring law firm which appears received the majority of the money.  Young, Lindsey and their co-conspirators were able to profit from this scam when the Texas auto insurance companies issued settlement checks for the said patients. Sentencing for the chiropractor has been scheduled for later this year.