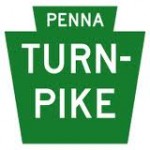 Post Date September 15, 2012 – A Federal Court Judge ordered a Texas Insurance Company to pay for the major clean-up from a tarry type material one of their client spilled all over the Pennsylvania Turnpike in 2011.  A claim of such magnitude of such a claim will cause the truck insurance rates of any company. On September 7th U.S. District Judge Joy Flowers Conti ruled that Hallmark Specialty Insurance Company of Texas to cover all clean-up costs and any claims against a MTS Transport a Trucking Company from Stevensville, Maryland.  The most interesting thing about the claims payment is MTS Trucking company did not request not pay for the environmental pollution endorsement on their truck insurance policy

The spill occurred  November 22, 2011 on the Pennsylvania Turnpike.  An MTS Transport tanker truck which had damage to it’s containment cell leaked a chemical call asphalt flux.   The very sticky and gooey compound leaked out of the containment trailer over a 40-mile stretch on the eastbound toll road, between Oakmont Fuel Plaza and the New Castle Exit. For those whom are not aware of what Asphalt Flux is used for; it’s a chemical used in the roofing trade. The Hallmark Specialty Truck Insurance Policy will be paying for over 1,000 damaged vehicles travelling from 16 different states,  damaged  tires, engines and other trucks and vehicles which drove through that stretch of the PA Turnpike after the spill and before it was cleaned up.  MTS Transport only had a $1 million Truck Insurance Policy through The Travelers Indemnity Company.  Although the one truck insurance policy had $1,000,000.00 limit; the claim filings show the coverage will not cover all of the damages brought about by the accident. The enormity of new cars which were damaged was quite upsetting to the courts. Many of the claims were for  recently purchased expensive cars. MTS Transport whom had the other truck insurance policy, Hallmark Specialty was underwriting a $4-million excess liability policy.  The truck insurance company refused to pay for the spill claims since they were not responsible for underwriting Pollution. When MTS Transport was to be responsible for paying the entire claim itself, it filed a law suit against  Hallmark.  When the case came before the U.S. District Court, it ordered their truck insurance policy company to pay for the damages.